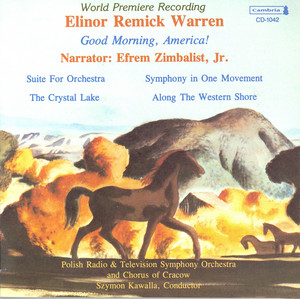 
ALBUM
Warren, E.R.: Good Morning, America! / Suite for Orchestra / the Crystal Lake / Along the Western Shore
ALBUM TRACK 2 OUT OF 10

Find songs that harmonically matches to Suite for Orchestra: II. Cloud Peaks by Elinor Remick Warren, Polish Radio and Television Orchestra, Szymon Kawalla. Listed below are tracks with similar keys and BPM to the track where the track can be harmonically mixed.

This song is track #2 in Warren, E.R.: Good Morning, America! / Suite for Orchestra / the Crystal Lake / Along the Western Shore by Elinor Remick Warren, Polish Radio and Television Orchestra, Szymon Kawalla, which has a total of 10 tracks. The duration of this track is 7:02 and was released on January 1, 1989. As of now, this track is currently not as popular as other songs out there. Unfortunately, some songs are not meant to be danced and Suite for Orchestra: II. Cloud Peaks might be one of them, due to it's low energy and danceability.

Suite for Orchestra: II. Cloud Peaks has a BPM of 95. Since this track has a tempo of 95, the tempo markings of this song would be Andante (at a walking pace). Based on the tempo, this track could possibly be a great song to play while you are doing yoga or pilates. Overall, we believe that this song has a slow tempo.

The key of Suite for Orchestra: II. Cloud Peaks is D♭ Major. In other words, for DJs who are harmonically matchings songs, the Camelot key for this track is 3B. So, the perfect camelot match for 3B would be either 3B or 4A. While, 4B can give you a low energy boost. For moderate energy boost, you would use 12B and a high energy boost can either be 5B or 10B. Though, if you want a low energy drop, you should looking for songs with either a camelot key of 3A or 2B will give you a low energy drop, 6B would be a moderate one, and 1B or 8B would be a high energy drop. Lastly, 12A allows you to change the mood.