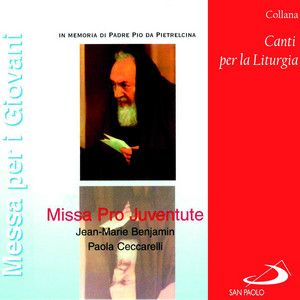 Audio information that is featured on Agnus Dei by Jean-Marie Benjamin, Paola Ceccarelli.

Find songs that harmonically matches to Agnus Dei by Jean-Marie Benjamin, Paola Ceccarelli. Listed below are tracks with similar keys and BPM to the track where the track can be harmonically mixed.

This song is track #8 in Collana canti per la liturgia: Missa Pro Juventute (Messa per i giovani in memoria di Padre Pio da Pietrelcina) by Jean-Marie Benjamin, Paola Ceccarelli, which has a total of 23 tracks. The duration of this track is 1:36 and was released on October 15, 2014. As of now, this track is currently not as popular as other songs out there. Agnus Dei doesn't provide as much energy as other songs but, this track can still be danceable to some people.

Agnus Dei has a BPM of 80. Since this track has a tempo of 80, the tempo markings of this song would be Andante (at a walking pace). Overall, we believe that this song has a slow tempo.