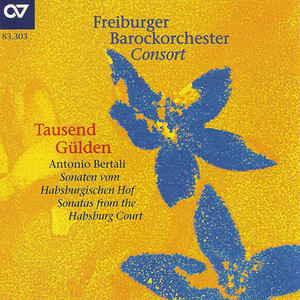 
ALBUM
Bertali, A.: Chamber Music
ALBUM TRACK 2 OUT OF 12

Audio information that is featured on Ciaconna in C Major by Antonio Bertali, Freiburger Barockorchester.

Find songs that harmonically matches to Ciaconna in C Major by Antonio Bertali, Freiburger Barockorchester. Listed below are tracks with similar keys and BPM to the track where the track can be harmonically mixed.

This song is track #2 in Bertali, A.: Chamber Music by Antonio Bertali, Freiburger Barockorchester, which has a total of 12 tracks. The duration of this track is 9:01 and was released on January 1, 2000. As of now, this track is currently not as popular as other songs out there. Ciaconna in C Major doesn't provide as much energy as other songs but, this track can still be danceable to some people.

Ciaconna in C Major has a BPM of 121. Since this track has a tempo of 121, the tempo markings of this song would be Allegro (fast, quick, and bright). Based on the tempo, this track could possibly be a great song to play while you are walking. Overall, we believe that this song has a fast tempo.